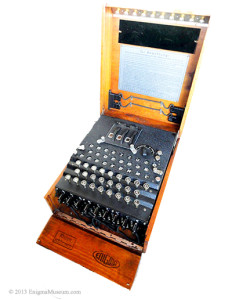 Invented by Arthur Scherbius in 1918, the Enigma cipher machine was adopted as the primary coding machine for all branches of the German military and High Command starting in 1926.  Polish mathematicians first broke the Enigma code in the late 1920’s and designed the first machines to successfully attack the Enigma code.

The groundbreaking success of the Poles allowed the British at Bletchley Park, and later, the Americans in Dayton, Ohio to regularly read German coded transmissions throughout World War II.  Relatively few Enigma machines survived the war as the retreating German armies destroyed them to avoid their capture and, at the end of the war, Churchill ordered the remaining machines destroyed.

Enigma Museum is devoted to locating, restoring, preserving, and trading in antique cipher, telegraph, scientific, and communications devices.  Please see our For Sale page for current information on Enigma machines for sale.